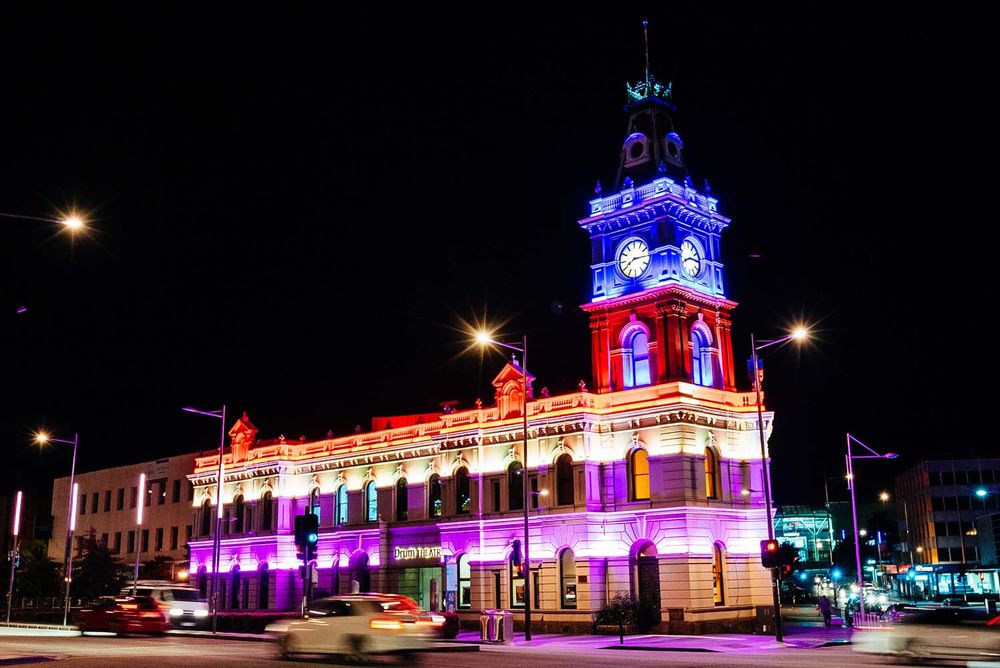 Built in 1890, the Dandenong Town Hall is a superb example of a Victorian 19th century town hall. It was designed by Beswicke and Hutchins, whose other credits include the Brighton, Malvern, Essendon and Hawthorn town halls.

In 2006, the site was redeveloped into the 521-seat Drum Theatre, designed by William Ross Architects. The redevelopment included the refurbishment of the historic Mechanics Hall building as the theatre’s entry, foyer, bar, functions and administration facilities. The repurposed town hall sits behind the original façade as a distinctive reminder of its history, with a glazed internal atrium that celebrates both the old and new buildings. The theatre is expressed as a dramatic, modern ‘drum’ that envelopes the auditorium, foyer amenities and fly tower as a single, strongly coloured form.

As an anchor for civic vibrancy and an attractor of audiences that include Dandenong’s diverse communities, Drum Theatre is well situated to build engagement with the performing arts for the City of Greater Dandenong’s citizens and the residents in Melbourne’s south east.

The Dandenong Town Hall and Drum Theatre is an outstanding marriage of old and new architecture, which provides a sense of place in Greater Dandenong.

Images: (1) Drum Theatre lit up. (2) View from Walker Street. (3) View from the theatre foyer to the clocktower. All images courtesy of Dandenong City Council

Drop in to the venue is welcome, but bookings for tours are required as group capacity is limited. Additional availability on the day will operate on a first come, first in basis.