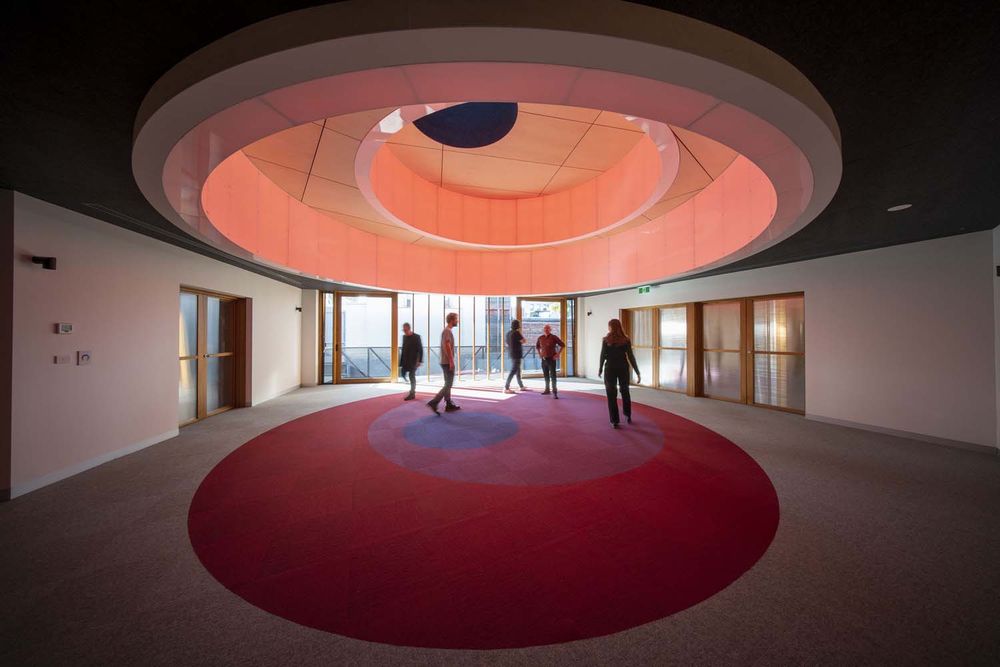 The Victorian Quaker Centre sits on the edge of the Melbourne CBD in a a triangular site – a wedge of leftover space between the greater Melbourne grid and the city grid, which is rotated approximately 28 degrees.

In their design response to this building, Nervegna Reed Architecture + pH architects took a thoughtful approach that avoids symbolism and monumentality while still embedding meaning into building’s materiality. A number of shifting asymmetrical circles have been inserted within the triangular space to denote the shift between the city and surrounding suburbs.

The building is a centre for Quaker Meeting for Worship. Many groups of Quakers and associated others meet there to share concerns and activities for peace, justice, refugees, earth care, climate change, education and children in a spiritually grounded environment.

Quaker Meetings are frequently held in a circle to allow all persons to be visually connected. The architects were prompted by this to include repeated circular shapes throughout the building.

Victorian Quaker Centre is also one of the seven sites featured in Take Hold of the Clouds, a curated exhibition for the Weekend that embeds responsive works within Melbourne’s most-loved architectural spaces.

Join a tour with Nervegna Reed Architecture + pH architects and members of the Quaker community showing you through the building (including the worship space and the library) and discussing Quaker philosophy and architecture.

All tours run for 40 minutes in groups of 30 people.

As part of the Victorian Quaker Centre's COVIDSafe Plan, it is a condition of entry that masks be worn inside this building during your visit. Thank you for your cooperation.