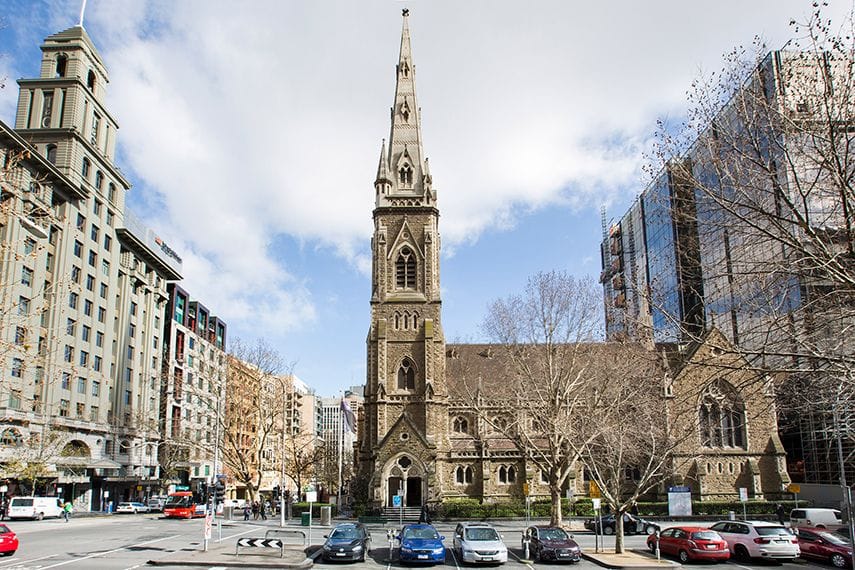 Since 1838 The Scots’ Church Melbourne has been continuously reaching out to the people of this city. When Rev. James Forbes arrived from Scotland, the first church was a temporary wooden building at the west end of Collins Street. Two acres on the present site were obtained and a school was built. This school served as a church on Sundays until a proper building, seating five hundred, was built in January 1841.

With the growing population, the congregation resolved in January 1869 to build a church designed by the notable architects Reed & Barnes. This is The Scots’ Church which you see today; with its famous austere interior, including fine timber fittings and magnificent stained-glass windows.

The style of the church is “decorated Gothic”, with Bluestone for the foundations, Barrabool Hills Freestone from Geelong for the superstructure, and cream-coloured Kakanui Stone from New Zealand for the “dressings.” The 120-ft high church’s spire was for many years the highest point in the city. The church was built by David Mitchell, who was the father of the famous Australian soprano – Dame Nellie Melba. The foundation stone was laid on 1st April, 1873 and the building opened on 29th November, 1874.