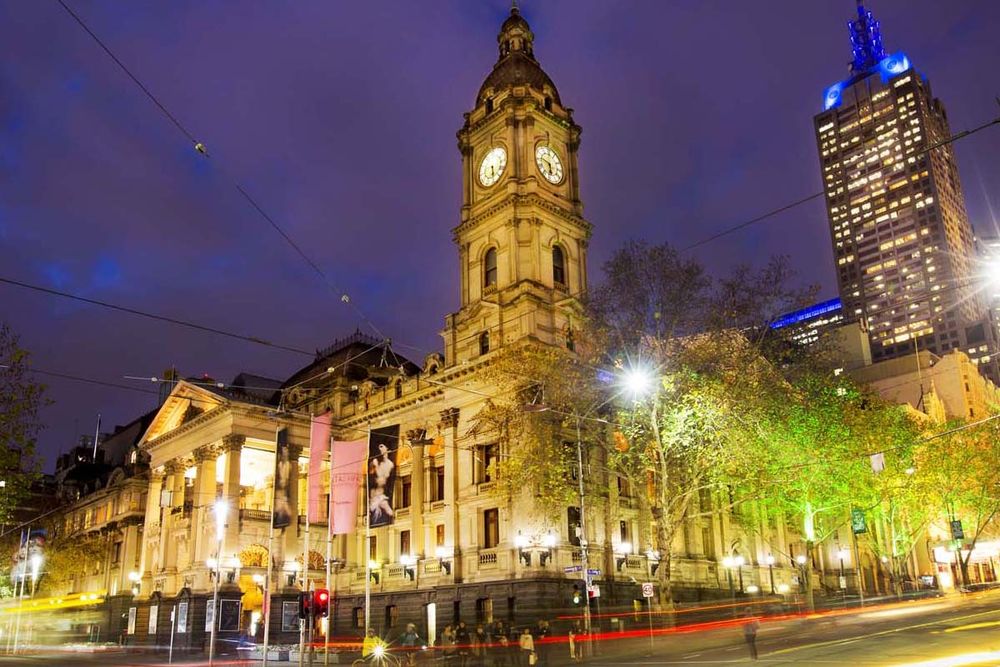 Melbourne Town Hall became the heart of the city and cultural civic activity when completed in 1870. Today it hosts theatre, weddings, receptions, exhibitions while operating as a workplace for council staff. The Second Empire style building (taking inspiration from several different periods and styles) celebrates its corner site with a tower in the grand French Renaissance style.

Construction of the Town Hall began in 1867 at the corner of Swanston and Collins streets. Architects Reed and Barnes had won a competition for its design, and the firm was also responsible for later additions in 1887. These additions included Prince Alfred Tower (1869), the temple-like portico (1887) and the extension along Collins Street (1925). The exterior façade is made from Tasmanian freestone and sits above rusticated bluestone plinth, while the clock tower houses clocks donated by the son of Melbourne’s first mayor, Henry Condell.

In a modern interpretation of the symbols on the city’s coat of arms, brass inlays laid into the bluestone pavement outside the Town Hall bear a sheep, bull, whale and ship, signifying the sources of Melbourne’s wealth in the early 1840s. There are also decorative elements on the Town Hall doorway.

For over 135 years, Melbourne Town Hall has been a focal point for events that have helped shape the Melbourne of today. As the location of today’s council meetings it still plays an important role in how Melbourne is shaped for the future. Participants will learn about the place where Federation was debated, Dame Nellie Melba debuted, and the Beatles waved from the portico at their adoring fans.

Led by a professional tour guide, take a walk through one of Melbourne’s most iconic buildings. The Portico was once the place where important visitors were presented to the people in the street below, giving everyone a great view. Visitors include Her Majesty Queen Elizabeth and Prince Phillip (1954), the Beatles (1964) and ABBA (1977), and Lionel Rose (1968), the first Aboriginal person to win the world bantamweight boxing title. Hear stories about the Yarra Room (the original council chamber) and the Melbourne Room, where Her Majesty Queen Elizabeth was entertained during her visit in 1954. The Melbourne Town Hall Grand Organ (1929) features in the Auditorium.

Saturday 30 + Sunday 31 July
Tours run every half an hour starting at 10am (final tour starts 4pm). Tours run for approximately 50 minutes, for up to 10 people maximum per tour.
Bookings essential.
All rooms are subject to availability on the day.

This event is booked out. Sign up to the waitlist through the booking link below.

Entry is via the main town hall administration doors on Swanston Street.