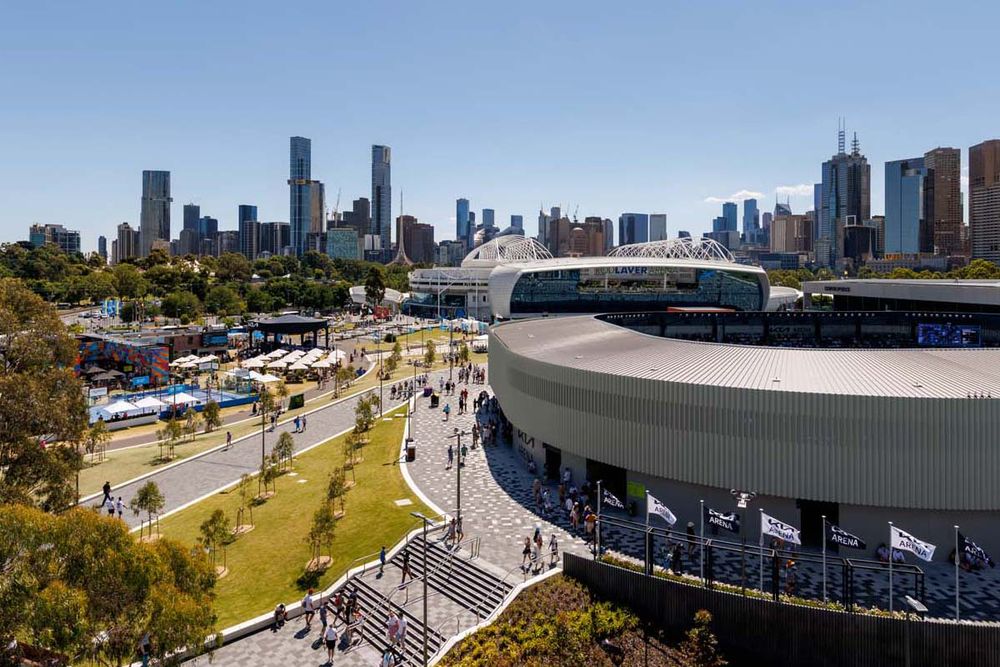 In 2021, Melbourne & Olympic Parks welcomed the completion of the Victorian Government’s Melbourne Park Redevelopment. Thanks to almost $1 billion invested, and over a decade of design and construction, the redevelopment cements the precinct as Australia’s premier sports and entertainment venue, securing the Australian Open until at least 2044.

CENTREPIECE at Melbourne Park and Show Court Arena (commercially known as KIA Arena) were the final two pieces of the redevelopment, designed by NH Architecture and completed in August 2021. Both were constructed nearly entirely under lockdown conditions, with many of the final details fleshed out over video call.

Designed and built for hosting spectacular galas, exhibitions, conferences and business events, CENTREPIECE is a new conference and events venue in the precinct. Its civic inspired architecture brings the CBD closer to Melbourne Park, while KIA Arena – a versatile outdoor tennis and entertainment venue seating 5,000 – takes the modern form of its neighbouring arena venues.

Both are linked by an underground network of logistics facilities, which also connects to neighbouring venues Rod Laver Arena, Margaret Court Arena and Tennis HQ. An invisible hive of activity during major events, the underground pathways pull together the athlete, performer, logistics, operational and food & beverage hubs, ensuring a seamless guest experience above ground.

CENTREPIECE, in particular, is a premier example of sustainable design, achieving LEED Gold certification through its energy efficient fittings, use of harvested rainwater for toilets, organic waste dehydrator and waste compounder which reduces the venue’s contribution to landfill.

Join a behind the scenes tour of Melbourne’s busiest sports and entertainment precinct. See inside two key venues for the Australian Open, and go back-of-house to discover how the venue’s brilliant design enables the seamless operation of a broad range of major events.

Saturday 30 July + Sunday 31 July
Tours run 10am, 11.30am, 1pm
Running for 60 minutes in groups of 15 people.
Bookings not required. Tour group capacity is limited and operates on a first come, first in basis.

Tours will depart from Reception at CENTREPIECE at Melbourne Park. Entry is from Rod Laver Arena forecourt area, adjacent to KIA Arena.